John McMahon is the 2020 Delhi Citizen of the Year

The Delhi & District Chamber of Commerce is pleased to announce that John Gerald McMahon a life-long citizen of the Delhi is the 2020 Delhi Citizen of the Year.John, is a great grandson to one of Delhi’s founding pioneers, Squire Michael McMahon and father to Catherine calling her the light of his life.   Following his youth education, John joined Her Majesty’s, Royal Canadian Corp of Signals -No1 Squadron 158 Troop in 1958, as a radio mechanic.  Returning to Delhi he farmed tobacco for over 40 years and worked as a real estate agent in the off season

While on the farm, community minded John would often come to the assistance of those in need and in turn his neighbours regarded him as “Mr. Fix-it, Dr. John” as he was a self -taught small engine mechanic and studied as a diesel mechanic.

At one time John had a badger, named Keith, and considered an endangered species, living on the farm that was one of only two hundred in Ontario.

John’s community involvement also extended to the Royal Canadian Legion Delhi Branch where he served as “Sergeant of Arms” for many years.  Further involvement with the Legion included leading the Legion marchers in every Norfolk County parade in his Willy’s army jeep, accompanied with his husky dog “Kickstart”.   Also, for many years John co-organized the November 11th Remembrance Day flyover of vintage military aircraft for Delhi and district as a tribute to veterans.

In addition to his many contributions with the Legion, John was a committed and valuable member of the Delhi La Salette Knights of Columbus serving as a Grand Knight for 2 years, Trustee for 3 years and a leader for council members including honouring deceased members and installing members into the 3rd degree in other Southern Ontario councils.   He also served as Commander for the Assembly and District Marshall, comprised of members throughout Haldimand-Norfolk and led honour guards for church and community celebrations

Other community based organizations benefited from John’s involvement.    The organizations included La Salette Area Rural Roots Organization and helping with the restoration of the St. Anthony’s cemetery.

John also provided personal support to many.  He celebrated 35 years of sobriety last year and over the years regardless of the time of day, would attempt to help those who needed help with their recovery. John dedicated his life, in sobriety, to doing good to make up for the years he was not sober.

Although John has endured his share of life’s challenges and losses including enduring a serious house fire, he has risen beyond the challenges to help others.  Always humble, he went about his life as a loyal and dedicated citizen of Delhi and surrounding area.

Unfortunately, John suffered a stroke in April 2018 and he is now living at Norview Lodge   Although not able to physically contribute to the many organizations, his spirit of kindness and giving has not diminished

John has unselfishly given of himself for the good of others throughout the Delhi area for years.   We are therefore pleased to recognize John McMahon as Delhi Citizen of the Year for 2020

A formal presentation will be presented at our Annual Gala, date to be determined

Amberlee Morgan is the 2020 Delhi Junior Citizen of the Year

The Delhi & District Chamber of Commerce is pleased to announce that Amberlee Morgan is the 2020 Delhi Junior Citizen of the Year.

Amberlee is a truly deserving recipient with a long list of accomplishments and community contributions.

She is a volunteer and assistant coordinator at the Delhi United Church Christmas dinner. Amberlee decorates floats and walks in the annual Christmas Parade. She is a Sunday School volunteer and speaker, also helps with the annual bazaar and meals

In addition to her Church volunteer work, Amberlee has been with Guiding Canada for 10 years, has up to 3 part time jobs at any one time. Amberlee was the Valedictorian at her Grade 8 graduation and is the student with the most academic awards in grades 9,10 and 11. She helps Tutor others in Math and Science at the resource center, and is active in the Drama club, White Pine Book Club, Delhi High School Youth club and the Me to We program.

Amberlee is on the DDSS Fair committee for grandstand decoration, the Tug of War team and has won several ribbons in the craft building at the Norfolk County Fair.

On behalf of the Delhi & District Chamber of Commerce we congratulate Amberlee on this much-deserved recognition.   She is true example of the positive attitude of the youth in Delhi.

2020 Business of the Year Award

Ben DeCloet diversified into the greenhouse sector in 1986 and hasn’t looked back.  The company is a leader in the design and manufacture of high quality greenhouses covering the complete range of design and requirements for production growers, nurseries, and retail centers across North America.

R. Dekoninck Masonry is the 2020 Delhi Long Standing Business of the Year

2020 Long Standing Business of the Year

Dekoninck Masonry started out as “Dekoninck and Son Masonry” and was founded by William Dekoninck. William, his wife Delphine and two children, son Maurice then 18 and daughter Yvonne 20, immigrated to Canada in 1946 from Belgium. William and Maurice already skilled masons from Belgium worked for Ed Kolumbus for a few years before venturing out and creating Dekoninck and Son Masonry in early to mid 1950. William and Maurice worked on projects such as the German, Belgium and Hungarian Halls in Delhi Ontario. William and Maurice also donated their time to the Our Lady Queen of Martyrs Church during its construction by helping with the brickwork.. Maurice Dekoninck eventually took over the company once William was ready to retire. Maurice ventured into larger construction projects and at times employed over 20 people. Maurice did both residential and commercial projects at the peak of his business before slowing down as he prepared for retirement. Ronald (Ron) Dekoninck worked with his dad Maurice throughout the years before taking over in 1988. Maurice continued to work with Ron for a few more years to help ease him into the business and teach him and his wife Marlene Dekoninck the ins-and-outs of running the company. Ron, later incorporated the company and changed the name to R. Dekoninck Masonry Inc. in 1989. Ron worked in both residential and commercial masonry like his father. Jeremy (Art) Dekoninck worked with his father and grandfather Maurice throughout his young life on weekends and during the summer breaks. Art learned from his grandfather, father and cousin Warner Maerten. Warner is married to Yvonne’s daughter, Monique. Warner has worked with William, Maurice, Ron and Art throughout the years. Art worked full time with his father once he graduated college and hasn’t look back since. Art, like William, Maurice and Ron learned from the ground up starting in the trenches as labourers until they earned their spot as masons and eventually business owners. Ron and Marlene passed on the company to Art and Jessica Dekonink in 2014. Ron has continued to be involved with the company by estimating projects and helping out where he can. R. Dekoninck Masonry Inc. has been successful and has withstood generations due to hard work, the love of the trade and especially our amazing employees past and present. Our guys work diligently in the extreme weather, long commutes, high elevations and in the trenches on a daily basis for our company and without them we wouldn’t be here today! We are hopeful that our company will continue onto the fifth generation to our son Jase Dekoninck. 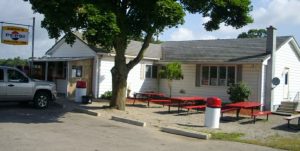 2020 Long Standing Business of the Year

The oldest eatery of its kind in Norfolk County, is the second winner of this year’s Longstanding Business Award.

Celebrating 73 years of continuous operation of the business, current owners Dale and Michele Docker are honoured to have been selected, and are thrilled the Chamber has focused attention on the west end of Norfolk County.  “We often feel like we are a forgotten breed here in the West End,” said Michele, “Even though we have a vibrant history, the beautiful Lakeside Community of Port Rowan, the Bio Sphere, the amazing beaches of Long Point and the heritage arena in Langton.”

Andy’s Gas Station and Sandwich Shop was founded back in 1947, and although it has changed hands seven times over that period, it has never missed a beat.  When Michele and Dale arrived on the scene 10 years ago, the building and grounds were spruced up to make room for the new addition to the Diner.

The moment you walk in you feel like you want to roll up the sleeves on your tee shirt, tuck your pack of smokes underneath, grab your gal and jitter bug the night away, whatever jitterbug means to you.  Maybe that’s the reason Andy’s has been in business a full eight years before the first McDonald’s was built, and why it will be around to celebrate 100 years of continuous operation, congratulations Michele and Dale.

Please contact us if you'd like to host a Business After 5 event. These gatherings are great opportunities to meet other local business owners.

Please email us at info@delhichamber.ca.

Or contact us by mail at Delhi and District Chamber of Commerce P.O. Box 11, Delhi Ontario N4B 2W8

You may also wish to read our Facebook page.